How to Make French Toast Without Eggs 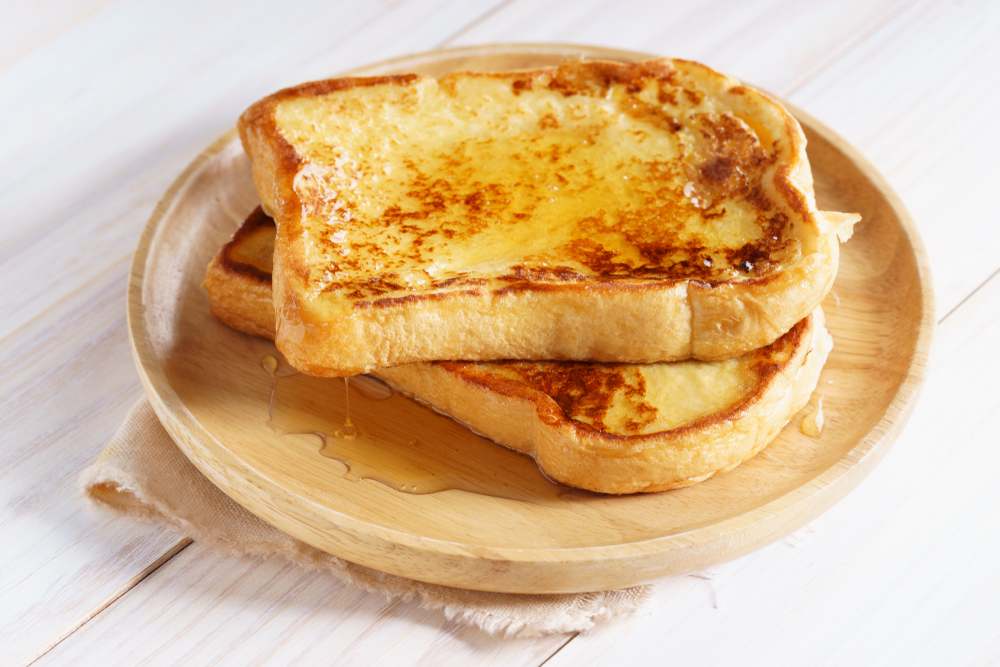 Well most of us make the French toasts with eggs. But in case you have a vegan friend at home, or you have turned to be a vegan, here is an amazing recipe about how to make French toast without eggs. Yes without eggs! Seems interesting. In this particular recipe, you can make the batter by using the corn starch instead of eggs.

They will act exactly like an egg. And at the end, you will have a yummy crunchy French toast, that too without eggs. For a better taste, you can also use the custard powder instead of the normal corn flour, which will be given an amazing fruity flavor to your toast and also the perfect yellow color to it just like the conventional French toasts.

Ingredients that are required for Eggless French Toast

Bread– You have to be very, very careful while choosing the perfect bread for your French toast because that will be your base. The most appropriate bread for French toast can be either the brioche or the challah, so far as I am concerned. However, please avoid buying it from stores, because most of the brioche, challah, panettone bread contains eggs in their ingredients.

Rather, you can bake them at your house, to get the pure and eggless bread. French toast can be made without egg if the maker uses components like leftover sandwich bread which has become stale, using eggless bread and also by making bread out of sourdough.

Corn-starch– Now this is the important ingredient that will substitute for the egg for French toast in our recipe. The corn-starch and sugar, when mixed, provide a perfect crust to the eggless French toast. One can also use custard powder instead of corn-starch.

If you use the custard powder in your recipe, it will make the batter light yellow in color, which looks just the regular egg-milk batter. So basically, there is no difference, so far as the color point of view is concerned. This gives the French toast its proper tinge yellow color. One can easily avail the custard color in a nearby grocery store.

Take a shallow bowl and add the desired flavoring like orange or vanilla to the mixture of corn-starch, milk and sugar. Custard powder can be used as an alternative of corn-starch as well. Whisk all these things well with a pinch of salt. Take a slice of the bread, dip it in the milk mixture, and cook in a skillet by adding some butter until both sides of the bread turn golden brown in color.

An important thing to be kept in mind while making is you have to look that you do not over dredge the bread slices in the batter. Because over dredging will make the bread very much soggy.

Here is a step by step guide for you to make the yummiest French Toast without using eggs in them, by using the above ingredients.

Firstly, let us make the batter. Preheat any non-stick skillet or griddle which you are going to use for making the batter. This should be done on a medium temperature setting with an ideal and functional gas stove. The next step is to combine 1 cup milk, 2 tablespoons of corn-starch or custard powder, as per your taste or convenience, 2 tablespoons of sugar, 1 teaspoon of vanilla extract, one-fourth teaspoon of the ground cinnamon, and a pinch or maybe one-sixteenth teaspoon of the salt in a shallow bowl. Now mix the all togetherness until they are well combined and mixed uniformly.

Coat both sides of bread properly by dipping it into the batter made out of milk and corn-starch. One caution to be taken is if you are using thin slices of the bread, do not soak too much or for too long otherwise, it will turn out to be very soggy. On the contrary, if you use thick slices of the bread, make sure that the bread is soaked properly and enough to absorb the milk-corn-starch mixture or batter we have prepared in Step 1.

Now take a skillet, and heat it over a medium flame on the gas stove. Take the butter in it and melt it on the skillet. Now, cook the coated bread slice until it turns out to be golden brown in color on one side, then flip the bread and cook the other side. In case the pan you use is smaller in size, cook in small batches, or cook in larger batches if the pan you use is larger. Now, cook the rest of the toasts by repeating the same steps.

One important thing to be remembered is to whisk the batter each time before using or coating the bread owing to the reason that the corn-starch tends to settle at the bottom. So, whisking it intermittently will allow the proper coating of the batter.

Finally, when cooked, serve them immediately, drizzled with a sweetener like maple syrup or honey and toppings of your choice and your convenience.

In case you are a vegan, you can try the vegan version. Substitute the regular butter with vegan butter which is plat based. This shall make your French toast without eggs vegan.

How to Make French Toast Without Eggs